Southern Hemisphere Mining Limited welcomed the announcement by Tesla CEO Elon Musk, that his company sees battery potential in manganese and is working on a new manganese battery cell.

Musk announced during a speech to Tesla Gigafactory Berlin employees this week, that Tesla sees potential in battery chemistry with a manganese-based cathode and reiterated that the industry needs to focus more on the battery supply chain down to the minerals.

Musk was quoted on Electrek.co saying in regards to a manganese-battery:

“I think there’s an interesting potential for manganese.”

Southern Hemisphere Mining’s 100% owned Los Pumas Manganese EV Battery Project has a current manganese resource of 23.7mt at 7.81% Mn ($SUH’s Market Cap <$10m providing plenty of upside on this sleeper asset), is located 175 km inland from the Port of Arica in Chile and is a multiple layered tabular style manganese occurrence with a surface expression over 3.6km in length. A full resource and scoping study on Los Pumas has already been carried out. 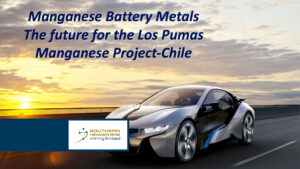 Musk also reiterated the need to focus on battery mineral supply to accelerate the transition to electric transport and renewable energy.

Watch his speech below.

Electrek also noted Tesla has been exploring using more manganese in its battery cells for a while, and although manganese is already used by Tesla in some battery chemistries, it is not the prominent component of any of them.

“It is relatively straightforward to do a cathode that’s two-third nickel and one-third manganese, which will allow us to make 50% more cell volume with the same amount of nickel.”

Musk didn’t elaborate beyond saying that Tesla was working on it, but it made it sound like manganese could be a solution along with nickel and iron-based chemistries.

With this upside on future manganese use by Tesla, Southern Hemisphere Mining is well positioned to be part of manganese battery cell production.